This morning the sky had an apocalyptic pall over it. Colors were shifted from the smoke filtered light. Ash had fallen on our property. Now our home isn’t close to the fire. We aren’t in any danger. Most of our friends are much closer. Many have had to evacuate. With Google Earth I was able to determine that we were 22 miles from the fire as the crow flies. That’s how far the ash had traveled.

This is the sky we woke up to this morning. 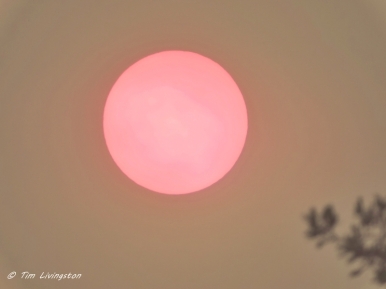 The sun was a big red ball through the smoke.

This was the view from Anderson on Monday afternoon soon after it started.

This is the same view today.

When it broke out it was big enough to create it’s own weather. Huge cumulus clouds formed over the smoke column.

A lone airtanker heads toward the fire on Monday. The planes have been grounded for the last two days for lack of visibility.

Conditions on the fire improved enough for the airtankers to get back into the fight this afternoon.

Based on latest hot spot map the fire may have spread south of Highway 299 near Redding. This is a terrible development. Hopefully the firefighters can stop the spread. Fortunately, it didn’t reach the forecast high of 113 today. It just made it to 111. Nevernind, I just found out it did reach 113.