This osprey put it all on the line defending its young, and paid for it.

Sorry, no wildflowers this week, only a sad story.  If you’ve followed my blog for a while you may have seen some of my posts about the ospreys that nest and raise their young on a large electrical tower at our mill site. The tower, perched near the Sacramento River, overlooks prime fishing habitat. These birds are practically mascots for our operation. Almost without fail ospreys raise two offspring in the tower nest every year and have done so for decades.

The osprey family 2015, just a week before the tragic incident.

However, a week ago last Monday, while in our office we heard the sound of a low-flying helicopter. This isn’t unusual except for the helicopter wasn’t just flying over. It was lingering. I strained to look out my window to see the helicopter, but it was just out of sight on the north side of the office. My window faces west. Then I saw an osprey buffeted by the rotor wash being blown off to the southwest. Next, a large bird wing fluttering to the ground outside my window. That got me out of my office and headed for the north end of the building. When I made it outside, the helicopter was gone. One of our foresters, our lead research scientist and her assistant met me. Our scientist was extremely agitated and told us the helicopter had struck one of the ospreys. As we walked out into the parking lot, the mill superintendent walked out from the opposite side and yelled to us. Then he reached under one of the pickups and pulled out the body of the dead osprey. He informed us that a number of the mill workers had seen the incident and were just about in tears. Fortunately, our research scientist got the aircraft identification numbers.

The osprey was cut to pieces defending its nest.

She recounted to us how the ospreys became agitated because the helicopter hovered so close to the nest. All four birds were at the nest, both parents and two offspring. The parents took off and were responding defensively. One of the birds began diving on the helicopter trying to drive it away from the nest. On its fourth pass at the helicopter, it was struck by the blades, severing both wings and plummeting to the ground. 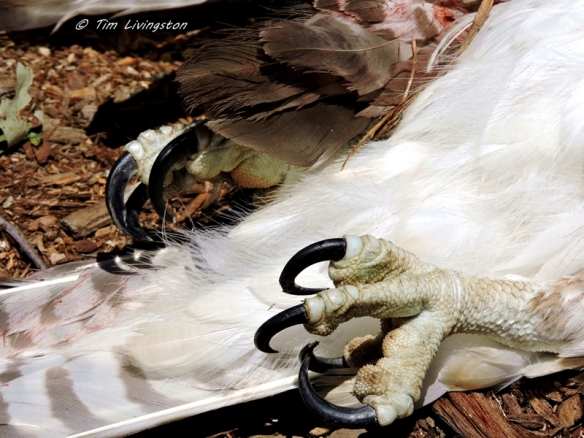 California Fish and Wildlife was contacted and a warden responded. He collected the remains and took statements. We are awaiting the results of the investigation.

I’ve been watching all week, hoping to see the three remaining birds at the nest. So far I’ve only seen two return, but most of the time there’s just one. Both of the offspring can fly and they come and go to the nest. Our biggest concern is that the young are unable to fish on their own. Hopefully, the remaining parent will be able to keep the youngsters fed and that this helicopter incident doesn’t result in three dead ospreys. I’ll keep you posted.

If you want to see the previously osprey post just click on the osprey tag below and they’ll come up.

69 thoughts on “Wild Wednesday … A Death in the Family”