Have you ever read a tree? Trees write stories for us to read, if you know how. They write their stories with tree rings. Trees grow a new ring each year. There have been many papers written on how tree rings from old trees show us climate cycles during the life of a tree. This type of study is called Dendroclimatology.

The tricky part of determining climate history from tree rings is that climate is only one variable that affects tree growth. Using tree rings to examine climate is best done with very old trees. Knowing what the forest was like around the tree as it grew, is also important. Corroboration with other old trees in the area is essential. In the early years of a tree’s life, it is often influenced much more by local factors other than climate. 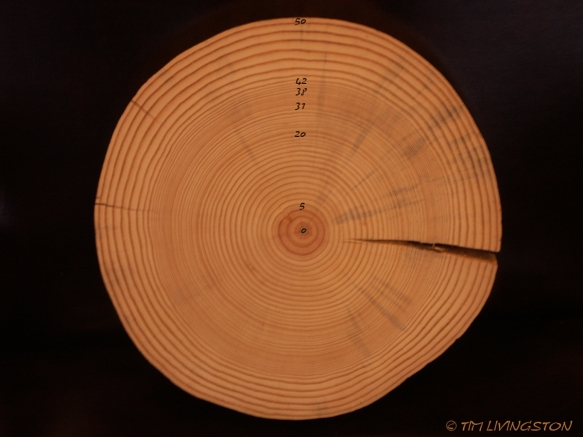 Above is a cross-section of a 50-year old Ponderosa pine tree. Let’s read it. This tree doesn’t tell us about climate, it tells us about it’s neighborhood. The numbers represent the age of the tree at that particular point.

0 years –               In the beginning, was the seedling. The tree seeded into an opening in the forest. Perhaps, the opening was a result of past timber harvesting or fire.

5 years –               The rings were wide and the tree was growing fast. At this time, the rings began to get smaller because the young tree was starting to compete with the neighboring saplings.

20 years –             The tree continued to grow at a slower rate, but the competition with the neighboring trees was really beginning to slow it’s growth. The foliage (crowns) of the trees grew together as the trees bumped into each other.

31 years –             The timber stand was very dense as the trees grew together. The lower limbs died since little sunlight reached them. With fewer limbs and foliage, the tree made less energy. The tree was growing very slowly.

38 years –             Something changed in the neighborhood, because this tree started growing a little faster. The timber stand may have been thinned in a logging operation, or some neighboring trees may have died from insect attack. Something reduced the number of neighboring trees. With fewer trees around it, our tree had less competition. It received a greater share of sunlight, water, and nutrients.

Now that you have seen it done, can you read a tree? Put on your detective hat and give it a try.

29 thoughts on “Forestry Friday … Can You Read Tree?”