I saw an osprey do the strangest thing the other day.  I was driving from the log yard to the pole yard and I saw one of the osprey go into an aggressive dive.  Located between the two yards is a canal.  I naturally assumed that the osprey was going after a fish in the canal.  I drove closer and pulled over to get some shots of the action.

It was an excellent chance to shoot the osprey.  Lately they have been sitting on the eggs and hanging out at the tower.  Not a lot of opportunity to get any interesting pictures.

The osprey on approach.

As I started taking pictures, the osprey wheeled around to come in for another swoop.  With his sights set on target he banked for the dive.

Gettin’ his dive on!

Then, the osprey did something unexpected!  Instead of diving into the canal the osprey dove into an open area.  It was fast and low, beautiful to watch.  Osprey are fish eaters and to my knowledge they don’t catch rodents.  So what was he doing? 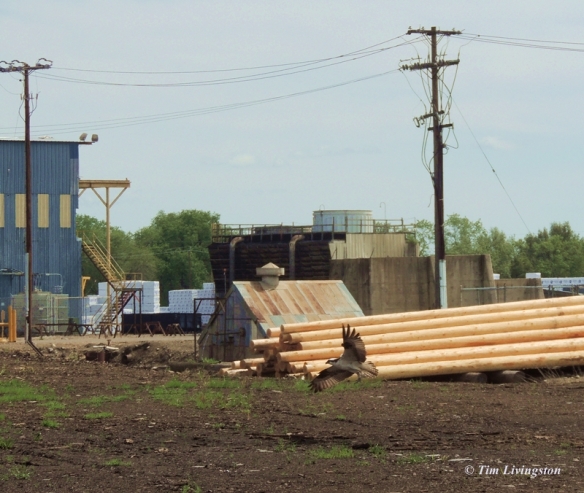 Coming in low and fast, but for what!

Up close and personal!

Then, he did the osprey snatch.  The osprey grabbed a stringy piece of cedar bark.  Bark, why bark?  He flew about ten feet and dropped the bark.  It all seemed quite purposeful.

The snatch and fly!  The osprey with the bark in his talons.

Then the osprey circle back around and headed out.

He did manage to give me a dirty look as he did his fly by.

Gettin’ the stink eye. I suppose that’s better than the other end.

I’m left with the question, what was the osprey doing?  Was he looking for material for the nest?  I don’t think so, because they haven’t worked on the nest for weeks and the eggs have been laid.  Did he think the bark was an animal?  I doubt it and I think they only eat fish.  Was he practicing or playing?  Maybe, why wouldn’t a well fed osprey engage in a little fun.

Do any of you good folks have any ideas as to what the osprey was doing?  I would love to hear your theory.