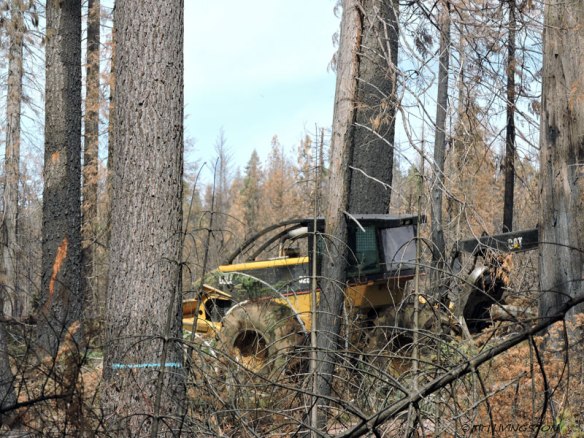 Skidding salvage logs to the landing in the King Burn.

This article appeared in The Economist and sums up the need and benefit of thinning the forests of the Sierra Nevada. I’ve added a few comments about it below.

The larval form of bark beetles are what kill the tree. The adult beetle chews a nursery gallery into the tree and lays her eggs. The larva hatch and spread out from that gallery creating more galleries as they feed. During this feeding process the larva girdle the cambium of the tree causing it to die.

I really appreciate the discussion regarding water generation through thinning. I believe this is one of the least discussed benefits of practicing forestry in the West, but in California it’s one of the biggest benefits with our constant water deficits. Thinning the Sierra forests would generate an enormous amount of water for California.

Commercial thinning that includes merchantable (larger) trees is the only economically sustainable way to accomplish the massive level of thinning that needs to be done. The author points out 52 trees per acre was the historic density of trees in the Sierra. Research has shown that the proper density for optimal growth in fully stock mature timber stands to be between 43 and 64 trees per acre depending on the size of the trees. If we remove 236 trees per acre to reach 64 trees per acre, then some of those trees have to be big enough to make a 2 x 4.  If there is enough value in the larger trees, a timber company will pay the federal government to thin the forest instead of the government paying a contractor to clean up and dispose of the unmerchantable trees.

What’s the upside? We get healthy resilient forests that are more fire resistant. Wildfires that do start are less severe, and safer and easier to control. There is more water available to the state. The wood isn’t left to rot. It is used in wood products and to generate electricity. People doing these forest related jobs see an economic benefit, particularly in the rural communities. The practice is sustainable and wood is our great renewable resource.

Lastly, some folks are going to fret over the impacts of logging at that scale. I want you to know this, timber harvests are studiously planned to mitigate the potential negative impacts they could cause. Secondly, just imagine the negative effects of these mega-fires.  I’ve seen them and their effects are staggering. I’ve yet to see one large burn ever have it’s negative impacts fully mitigated.

16 thoughts on “Forestry Friday … Loggers To The Rescue﻿”